February 2020 Thinking further into the future while acting now

Thinking further into the future while acting now

We are serious about moving the sustainability needle. Our six-part series describes the mindset shifts we believe are essential for bringing about change, and this second one reflects upon the importance of long-term thinking when making decisions today.

What is the shift required?

In the world of business, short-termism is a reality that is widely bemoaned, as business guru Peter Drucker pointedly declared in a Wall Street Journal editorial in 1985: “Everyone who has worked with American management can testify that the need to satisfy the pension fund manager’s quest for higher earnings next quarter, together with the panicky fear of the raider, constantly pushes top managements toward decisions they know to be costly, if not suicidal, mistakes.” Not much has changed since then and, therefore, “We are living in an interminable succession of absurdities imposed by the myopic logic of short-term thinking,” as said Jacques Yves Cousteau.

We know many of our decisions undermine our future, yet we still carry them out. That needs to change.

Why isn’t it happening?

The short answer: it seems that ‘hyperbolic discounting’ prevents us from doing the right thing today. This term delineates how as human beings we have a tendency to procrastinate and postpone something until tomorrow - though when we are asked to predict our future behaviour, we anticipate doing the right thing sooner rather than later! The short video clip below explains and illustrates the concept, which stems from the field of behavioural economics.

When asked whether we are likely to wash the dishes after a dinner in a month’s time from now that very evening or the next morning, most of us will declare that we will do it the same evening.  However, when that day comes around, we are much more likely to postpone it to the morning that do it the evening of the dinner … this has a consequence of discounting the future.

To meet our shared vision of a sustainable future, we face an additional challenge beyond long-term thinking, we need to change the way we do things. As Einstein (1879-1955) declared, “Doing something over and over again and expecting different results amounts to insanity.” This means that we face the challenge of any innovator: almost 500 years ago, Machiavelli (1469-1527) acknowledged this conundrum in The Prince,: “There is nothing more difficult to take in hand or dangerous to conduct than the introduction of a new order of things; for the innovator has as enemies all those who have done well under the existing, and only lukewarm supporters in those who may do well under the new.”

Is it the same for everyone?

While procrastination and a tendency to postpone chores are considered a norm of human behaviour, research into national culture indicates that different nations have different attitudes towards the short and long term. From the world of business, we are probably all familiar with contrasting the short term perspective of the UK and USA with the longer term view of Germany and Japan. Indeed, there is the German saying: do not postpone until tomorrow what you can do today.

This takes us again to Hofstede’s six cultural dimensions (a brief introduction to each can be found here). A nation’s attitude towards the long / short term is one of the dimensions that defines them.  As Hofstede explains, “In a long-time-oriented culture, the basic notion about the world is that it is in flux, and preparing for the future is always needed. In a short-time-oriented culture, the world is essentially as it was created, so that the past provides a moral compass, and adhering to it is morally good.” Check out his video below in which he explains this dimension.

You can compare up to four countries across Hofstede’s dimensions here; below are a few examples as well as the world at a glance. 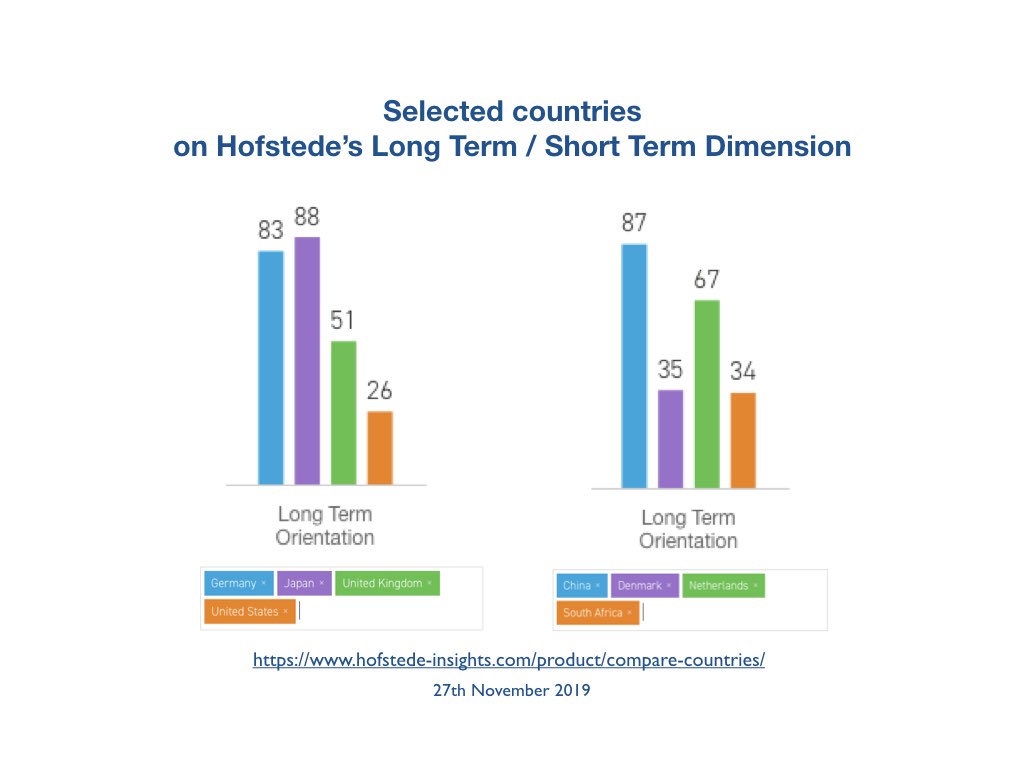 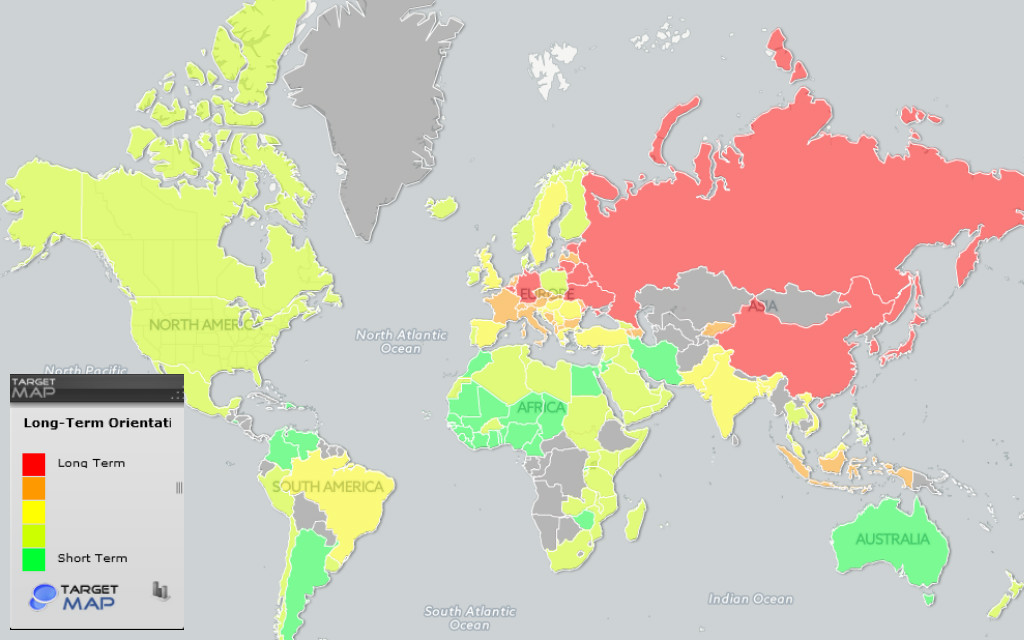 What can be done about it?

How can we make doing the right thing the preferred choice? How can making decisions in favour of the long term and sustainability become the ‘biscuit today’ rather than ‘washing the dishes tomorrow’? One method is to make the better behaviour fun! Through their Fun Theory campaign, VW are proponents of using fun as a carrot approach. Check out this video, demonstrating how people can be motivated to use stairs over escalators!

Perhaps there is also something to be learned from attitudinal changes at the societal level such as drink-driving shifting from a ‘cavalier’s delict‘ to becoming a tabu, or the speed with which smoking bans have spread? Both were achieved through a combiination of awareness building and penalties?

Setting targets and holding each other accountable are also levers that can be used - though all we really would have to do is embrace the ancient Iroquois philosophy as basis for all decision making:

In every deliberation we must consider the impact on the seventh generation.

Who is already doing it?

Do you know any sustainable disruptive innovations that lead the way?

You can read:
The introductory newsletter here;
Part 1, Understanding connectedness and thinking in systems here;
Part 2, Letting go of the illusion of control here.